Information on courses and relevant handouts/articles

INFINITE TAI CHI STAGES 1-3
Tai Chi students can use this handout to assist with learning the names of the movements in the form.
new+LF+itc+description+of+stages+1-3.doc
Microsoft Word document [37.0 KB] 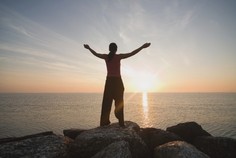 Finally, a cure for the common cold science has been seeking all our lives. What is it? Qigong and Meditation. See article. A 2012 University of Wisconsin, Madison, study found that mindful meditation can cut your chances of catching a cold by 40 to 50%.

Fifty-one people using mindfulness techniques logged 13 fewer illnesses and 51 fewer sick days than a control group during one cold and flu season. A University of Virginia study found that their varsity swim team swimmers got 70% fewer respiratory infections when practicing Qigong at least once a week, compared to swimmers who used it less. -- Prevention Magazine's Winter/2012 Issue

FIND LINKS TO OTHER BREAKING RESEARCH at WorldTaiChiDay.org's world renowned Tai Chi (Qigong) Medical Research site, where you can look up 100 common health issues, to find reports on medical research showing how tai chi or qigong may help those conditions. Our Medical Research Library is used by individuals, government, healthcare, and media worldwide.

For numerous, complex sociological and political reasons,2 Tai Chi has become one of the best known forms of exercise or practice for refining Qi and is purported to enhance physiological and psychological function.

The one factor that appears to differentiate Tai Chi from Qigong is that traditional Tai Chi is typically performed as a highly choreographed, lengthy, and complex series of movements, while health enhancement Qigong is typically a simpler, easy to learn, more repetitive practice.

However, even the longer forms of Tai Chi incorporate many movements that are similar to Qigong exercises. Usually, the more complex Tai Chi routines include Qigong exercises as a warm-up, and emphasize the same basic principles for practice, that is, the three regulations of body focus, breath focus and mind focus.

Therefore Qigong and Tai Chi, in the health promotion and wellness context, are operationally equivalent.﻿

Overview of Qigong and Tai Chi

Qigong is, definitively, more ancient in origin than Tai Chi and it is the over-arching, more original discipline incorporating widely diverse practices designed to cultivate functional integrity and the enhancement of the life essence that the Chinese call Qi. Both Qigong and Tai Chi sessions incorporate a wide range of physical movements, including slow, meditative, flowing, dance-like motions.

In addition, they both can include sitting or standing meditation postures as well as either gentle or vigorous body shaking. Most importantly, both incorporate the purposeful regulation of both breath and mind coordinated with the regulation of the body. Qigong and Tai Chi are both based on theoretical principles that are inherent to traditional Chinese medicine (TCM).1 In the ancient teachings of health-oriented Qigong and Tai Chi, the instructions for attaining the state of enhanced Qi capacity and function point to the purposeful coordination of body, breath and mind (paraphrased here): “Mind the body and the breath, and then clear the mind to distill the Heavenly elixir within.”

This combination of self-awareness with self-correction of the posture and movement of the body, the flow of breath, and stilling of the mind, are thought to comprise a state which activates the natural self-regulatory (self-healing) capacity, stimulating the balanced release of endogenous neurohormones and a wide array of natural health recovery mechanisms which are evoked by the intentful integration of body and mind.

Despite variations among the myriad forms, we assert that health oriented Tai Chi and Qigong emphasize the same principles and practice elements. Given these similar foundations and the fashion in which Tai Chi has typically been modified for implementation in clinical research, we suggest that the research literature for these two forms of meditative movement should be considered as one body of evidence.

Qigong translates from Chinese to mean, roughly, to cultivate or enhance the inherent functional (energetic) essence of the human being. It is considered to be the contemporary offspring of some of the most ancient (before recorded history) healing and medical practices of Asia. Earliest forms of Qigong make up one of the historic roots of contemporary Traditional Chinese Medicine (TCM) theory and practice.2

Many branches of Qigong have a health and medical focus and have been refined for well over 5000 years. Qigong purportedly allows individuals to cultivate the natural force or energy (“Qi”) in TCM that is associated with physiological and psychological functionality. Qi is the conceptual foundation of TCM in acupuncture, herbal medicine and Chinese physical therapy. It is considered to be a ubiquitous resource of nature that sustains human well-being and assists in healing disease as well as (according to TCM theory) having fundamental influence on all life and even the orderly function of celestial mechanics and the laws of physics.

Qigong exercises consist of a series of orchestrated practices including body posture/movement, breath practice, and meditation, all designed to enhance Qi function (that is, drawing upon natural forces to optimize and balance energy within) through the attainment of deeply focused and relaxed states. From the perspective of Western thought and science, Qigong practices activate naturally occurring physiological and psychological mechanisms of self-repair and health recovery.

Also considered part of the overall domain of Qigong is “external Qigong” wherein a trained medical Qigong therapist diagnoses patients according to the principles of TCM and uses “emitted Qi” to foster healing. Both internal Qigong (personal practice) and external Qigong (clinician emitted Qi) are seen as affecting the balance and flow of energy and enhancing functionality in the body and the mind. For the purposes of our review, we are focused only on the individual, internal Qigong practice of exercises performed with the intent of cultivating enhanced function, inner Qi that is ample and unrestrained. This is the aspect of Qigong that parallels what is typically investigated in Tai Chi research.

There are thousands of forms of Qigong practice that have developed in different regions of China during various historic periods and that have been created by many specific teachers and schools. Some of these forms were designed for general health enhancement purposes and some for specific TCM diagnostic categories.

Some were originally developed as rituals for spiritual practice, and others to empower greater skill in the martial arts. An overview of the research literature pertaining to internal Qigong yields more than a dozen forms that have been studied as they relate to health outcomes (e.g., Guo-lin, ChunDoSunBup, Vitality or Bu Zheng Qigong, Eight Brocade, Medical Qigong).2, 27–29

The internal Qigong practices generally tested in health research (and that are addressed in this review), incorporate a range of simple movements (repeated and often flowing in nature), or postures (standing or sitting) and include a focused state of relaxed awareness and a variety of breathing techniques that accompany the movements or postures. A key underlying philosophy of the practice is that any form of Qigong has an effect on the cultivation of balance and harmony of Qi, positively influencing the human energy complex (Qi channels/pathways) which functions as a holistic, coherent and mutually interactive system.

Tai Chi translates to mean, “Grand Ultimate”, and in the Chinese culture, it represents an expansive philosophical and theoretical notion which describes the natural world (i.e., the universe) in the spontaneous state of dynamic balance between mutually interactive phenomena including the balance of light and dark, movement and stillness, waves and particles. Tai Chi, the exercise, is named after this concept and was originally developed both as a martial art (Tai Chi Chuan or taijiquan) and as a form of meditative movement.

The practice of Tai Chi as meditative movement is expected to elicit functional balance internally for healing, stress neutralization, longevity, and personal tranquility. This form of Tai Chi is the focus of this review.